Saint Isidore and other saints for modern-day calamities - Hozana

Danielle in 7 days with the Saints - but not your usual!

Saint Isidore and other saints for modern-day calamities

Welcome to our first day of prayers with the Saints! Today, our star guest is Saint Isidore of Seville. You'll find out very soon why I chose to feature him on our first meeting.

Saint Isidore (c.560, April 4, 636),  was born in Spain, in a family of saints - as the Catholic Church celebrates him and all his siblings as known saints- in tormented times of decadence, disintegration, violence, and illiteracy, due to almost two centuries of Visigoth occupation of the area.

Young Isidore received an excellent education and proved himself a gifted student, who mastered rapidly Latin, Greek and Hebrew. At the death of his brother Leander, who was the Archbishop of Seville, Isidore replaced him.

Soon, Isidore realized that the full assimilation of the various people who constituted the Hispano-Gothic Kingdom was the key to improvement of the spiritual and material well-being of the country. To do so, Isidore relied on both religion and education. Somehow, he succeeded: the Visigoth, who practiced Arianism (a 4th-century heresy which denies that Jesus Christ is God) converted to Catholicism, other heresies were nipped in the bud, education flourished, and religious discipline was strengthened all over the nation.

Although Isidore contributed immensely to the societal advancement of his nation, he is far more known for his work; he was a very productive, all-around writer, or rather a compiler: the most important and best-known of all his writings is the "Etymologiae", which was later to be used as a textbook for nine centuries. It is an impressive 20-books opus, written in simple Latin, containing all the answers to any question a person may ask, on any topic.

Less than two centuries after Isidore's death,  Etymologies was found in every cultural center in Europe and became the standard work of reference. It was consulted by everyone, clerics, scientists, physicians, philosophers, etc. and was one of the earliest printed books (1472). It was quoted by scholars, and the more it was cited, the more it became authoritative, as any scientific research nowadays.

One well-informed, modern, up-to-date Pope noticed the similarity between Isidore's compendium and a famous human invention of the 20th century, which contains all the knowledge of humanity on any topic, is written in plain language and is quoted by scholars, becoming more and more authoritative: the Internet. He found that the Internet was used precisely in the way the Etymologies was used, as a powerful tool for those seeking wisdom - well, let's pretend that's the case, at least.

For that reason, St. John Paul II proposed St. Isidore of Seville as a candidate for the patronage of the most modern of information collections. Today, although the Vatican didn't make an official choice yet, Isidore is widely recognized as the Patron saint of the Internet, computers, computer users, programmers, and electronics.

There is even an obscure online group called "The virtual order of St. Isidore of Seville", whose aim is to "celebrate the beginning of Christ's Third Millenium, honor St. Isidore of Seville as the Patron Saint of the Internet, and promote the ideals of Christian Chivalry through the medium of the Internet." I am not sure yet if this is a vast joke or a real thing since the website is so poorly made and triggers my antivirus at every connection attempt, but they have a neat prayer to say before entering the Internet:

"Almighty and eternal God, who has created us in Thy image and bade us to seek after all that is good, true and beautiful, especially in the divine person of Thy only begotten Son, our Lord Jesus Christ, grant, we beseech Thee, that through the example of Saint Isidore, bishop and doctor, during our journeys through the Internet, we will direct our hands and eyes only to that which is pleasing to Thee and treat with charity and patience all those souls whom we encounter. Through Christ our Lord, Amen."

Well, I guess it's the end of me spamming my friends' inbox with cute kitties pictures, wasting my time on online video games and starting flame wars on public fora.

St. Isidore of Seville, pray for us!

Now that you know to whom you may turn when your wi-fi is down, I'll list for your convenience the saints that will help you mitigate our modern-day, first-world calamities:

For TV and TV-related issues, such as compulsive Netflix binge-watching, please send your prayers to St. Clare of Assisi: she is the patroness of TV since 1958; on Christmas Eve, near the end of her life, St. Clare fell seriously ill, and was unable to attend Midnight Mass. As she was all alone, God granted St. Clare a vision: on her wall, in a holy broadcast, she was able to see and hear the Mass as if she was there.

One could wonder why Pope Pius XII chose St. Clare, but it does make sense. Pius XII foresaw that TV and TV-related culture "[could] be the source of very great wealth, but also of deep troubles.” As a result, he chose a saint known for her humility, poverty, and love for the Lord to be an effective rampart against the many negative aspects of the TV.

St. Clare of Assisi, pray for us!

For radio and phone malfunction, call St. Gabriel Archangel. It's easy to understand why: since St. Gabriel is God's top messenger, he was appointed patron saint of communications. And if you want to protect your latest iPhone XS, you can always ask to have it blessed: some priests are "happy to embrace the realities of modern life."

And they are very creative when it comes to blessing objects that aren't referenced in the actual Book of Blessings. Here's what one of them, Father Z, said back in 2009: "there are blessings for Telegraph machines in the older Rituale. And iPhones are used for e-mails and SMS. There is a blessing for a radio station, and the iPhone does broadcast and receive.
I guess you could use the blessing "For all things", but I rather like the idea of a little adaptation to those I mentioned above. I once blessed the hardware going into someone’s knee-replacement. I used the blessing for mountain climbing equipment.
I am ever the optimist."

St. Gabriel Archangel, pray for us! 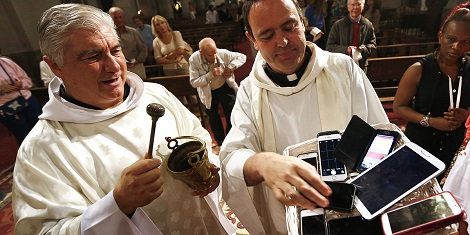 Prayer to the Saints:

Almighty and Everlasting God,
who dost enkindle the flame of Thy love in the hearts of the saints,
grant unto us the same faith and power of love;
that, as we rejoice in their triumphs
we may profit by their examples, through Jesus Christ our Lord.
From the Gothic Missal.

2- Blessing of cell phones and iPads by Father Gil Florin in Nice, France. Picture by Valery Hache, for AFP.

7 days with the Saints - but not your usual!