Providencia in Novena to Mother Teresa of Calcutta 2019 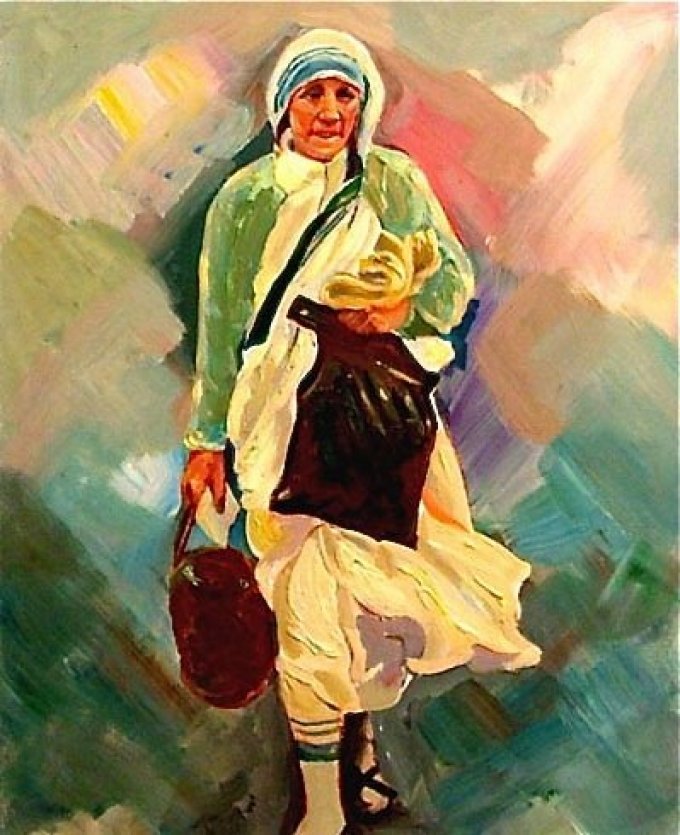 The good you do today may be forgotten tomorrow. Do good anyway. Give the world the best you have and it may never be enough. Give your best anyway. For you see, in the end, it is between you and God. It was never between you and them anyway - Mother Teresa

Upon pronouncing her temporary vows on May 24th, 1931, young Agnes chooses "Teresa" for her new name, as she feels a strong connection with Thérèse of Lisieux who "[did] little things with great love."

And after the days of her [Mary] purification were fulfilled, according to the law of Moses, they [Joseph and Mary] brought him [Jesus] to Jerusalem, in order to present him to the  Lord, just as it is written in the law of the Lord, "For every male opening the womb shall be called holy to the Lord," and in order to offer a sacrifice, according to what is said in the law of the Lord, "a pair of turtledoves or two young pigeons." And behold, there was a man in Jerusalem, whose name was Simeon, and this man was just and God-fearing, awaiting the consolation of Israel. And the Holy Spirit was with him. And he had received an answer from the Holy Spirit that he would not see his own death before he had seen the Christ of the Lord. And he went with the Spirit to the temple. And when the child Jesus was brought in by his parents, in order to act on his behalf according to the custom of the law, he also took him up, into his arms, and he blessed God and said: "Now you may dismiss your servant in peace, O Lord, according to your word. For my eyes have seen your salvation, which you have prepared before the face of all peoples: the light of revelation to the nations and the glory of your people Israel." And his father and mother were wondering over these things, which were spoken about him. And Simeon blessed them, and he said to his mother Mary: "Behold, this one has been set for the ruin and for the resurrection of many in Israel, and as a sign which will be contradicted. And a sword will pass through your own soul, so that the thoughts of many hearts may be revealed." [...] And after they had performed all things according to the law of the Lord, they returned to Galilee, to their city, Nazareth. Now the child grew, and he was strengthened with the fullness of wisdom. And the grace of God was in him.

During their life, Joseph and Mary had several astonishing encounters - shepherds sent by angels, magi who came from the West with invaluable riches, Simeon who praised God for meeting Jesus and prophetized the salvation of Israel and all the world's nations... But still, the two parents didn't change anything in their way of life in poverty and simplicity, obedient to the law of their people and the mission assigned to them.

O Lord, I entrust to you this new year coming along. Help me live my daily life with depth and faith and welcome you in the silence and the simplicity of my heart. Like Joseph and Mary raising and watching the child Jesus grow in Nazareth, teach me to see the extraordinary in the ordinary, and to transform each day ordinary things into extraordinary by the power of my faith and my love. Amen.

Follow this prayer by one "Our Father," one "Hail Mary," and the daily prayer of Mother Teresa, which can be accessed by clicking on "Pray" below.

Today's little resolution: I will select a person I see on a daily basis (or very often) and exchange a few words with him/her to see how s/he is doing.

Linda Mary Liotino
Brick Township, 1 year ago
Truly a beautiful start to this Novena...I have shared it I pray many will pray it...BLESSINGS!
Pray (1) Answer

Sara Adkisson
Spring Valley, 1 year ago
Thank you so much a wonderful prayer
Pray (2)

Novena to Mother Teresa of Calcutta 2019

Summary - From August 28th to September 5th, let us ask for Mother Teresa's intercession to grow in faith in action during the upcoming year and to become worthy to stand before God's eyes.  Discover the community

Day 2 - Welcome your responsibilities with joy

Day 3 - Give yourself to the poor