Saint Kateri is the first North American indigenous person to be canonized by the Roman Catholic Church; she was born in 1656 at Ossernenon (Auriesville, N.Y.), daughter of an Algonkin and a Mohawk; she died in 1680 near Montréal.
Tekakwitha’s Algonkin mother, a Christian who had been brought up by French settlers at Trois-Rivières, had been captured about 1653. Shortly afterward, she had been chosen by a Mohawk to be his wife. In 1660, she was carried off by smallpox, along with her husband and her last-born child. Young Tekakwitha, whose face was pock-marked and whose eyes were badly affected, almost died too. She was taken in by her uncle, the first chieftain of the village and a declared enemy of the Christian faith.
On several occasions, her relatives tried to make her marry, but she always refused, to their great displeasure.
In 1675, Father Jacques de Lamberville, a Jesuit, entered her lodge for the first time. She revealed to him her desire to receive baptism. The ceremony took place on Easter Day, 1676, and the young woman was given the name Catherine, which would be modified to Kateri.
Her conversion brought upon her a veritable persecution. She was even threatened with death. Amidst all these trials, Father Lamberville advised her to pray unremittingly and to go to live at the Saint-Louis (Lachine) rapids. In the autumn of 1677, with the aid of three indigenous neophytes, she succeeded in fleeing.
It was at the Saint-François-Xavier mission that Kateri Tekakwitha definitely prepared herself for the Christian life. Anastasie Tegonhatsiongo, who had formerly been her mother’s friend at Ossernenon, acted as her spiritual guide. Because of her exceptional qualities, she was allowed to take her first communion by Christmas of 1677, sooner than was usual for converts. In addition, in the spring of 1678, she was received into the Confrérie de la Sainte-Famille, despite her youth.
The strength of Kateri Tekakwitha’s spirituality lay in an extraordinary purity of body and soul and an efficacious charity towards all. This laywoman lived in full the life of her people, in the village as on the great winter hunts. Not until 1678, less than two years before her death, did she cease to accompany her people in their search for game; at this time the Eucharist had taken such a powerful hold upon her that, even at the risk of suffering hunger, she no longer wished to be away from the church for long months. Even in the fervent environment of the mission, she had to endure great trials, in particular false accusations. Later her slanderers were the first to praise her.
Kateri Tekakwitha would have liked to found a community of indigenous nuns, but Father Lamberville persuaded her to give up the idea. On 25 March 1679, on the feast of the Annunciation, she was permitted to take in private the vow of perpetual chastity. It is easy to understand why posterity named her the Lily of the Mohawks.
She used to submit herself to painful mortifications, which she moderated on her director’s order. She concealed this penitential spirit to the best of her ability; she liked jokes and would laugh heartily.
Kateri, whose health had always been mediocre, became aware at the beginning of 1680 that she was seriously ill. On the Tuesday of Holy Week, she received the last sacrament. The next day, 17 April, at barely 24 years of age, she passed away very easily while uttering the names of Jesus and Mary.
After her death, Father Cholenec observed that Kateri’s features, which had been marked by smallpox, had become remarkably beautiful. In consequence of conspicuous favors obtained through her intercession, there soon sprang up a strong devotion to her. Kateri Tekakwitha was named venerable on 3 Jan. 1943 and then blessed on 22 June 1980, before being canonized on 21 Oct. 2012. Devotion to her has spread to Canada, the United States, and throughout the world. Each year pilgrims travel to Auriesville and to the Saint-François-Xavier mission at Caughnawaga, where her relics are preserved.
By Henri Béchard, in "Dictionary of Canadian Biography," Vol.I, 1966. Henri Béchard was the co-postulator for the beatification and canonization cause of Kateri Tekakwitha.

Saint Kateri Tekakwitha is the patron saint of orphans, of people in exile and people ridiculed for their faith, among other patronages. She was also one of the patron saints of 2016 WYD.

On trusting Jesus: "I am not my own; I have given myself to Jesus. He must be my only love. The state of helpless poverty that may befall me if I do not marry does not frighten me. All I need is a little food and a few pieces of clothing. With the work of my hands, I shall always earn what is necessary and what is left over I'll give to my relatives and to the poor. If I should become sick and unable to work, then I shall be like the Lord on the cross. He will have mercy on me and help me, I am sure."

Saint Kateri Tekakwitha made a heroic decision to respond to God’s call to live a devout Christian life through her trials and deep suffering—epidemic disease, tensions and fighting among warring Indian tribes, and the severe persecution of her faith.
Even though she lost her family, her eyesight, her physical beauty, her good health, and her village, she used all of these extremely difficult personal circumstances to cultivate a life of deep prayer and sanctity.
She is a model for our own times in that she shows us how, with faith in Christ, we can persevere no matter what personal calamities, social unrest, or religious persecution may come to us. St. Kateri overcame every obstacle by submitting herself entirely to Jesus Christ.  She is also a model for young people who are striving to live a holy and chaste life, especially without the guidance of parents.

Prayer for the Youth with Saint Kateri Tekakwitha

O most humble Kateri, I seek your love and prayers. I turn to you for your inspiration.
May I know the power of humility; the strength of seeking God’s will in everything I do this day;
the compassion to care this way for those who are weak and are in need of help;
and the faith to forgive those who walk a hurtful and violent path.
Pray with me Kateri, that through us God our Creator will comfort the orphan,
watch over the neglected child, and wait with the youth who go astray.
You lost your parents and found others along the way to care for and guide you.
May all parents and grandparents stay healthy, seek the selfless love of Jesus,
and give where giving is most needed.
May they make wise decisions and heed daily to the Wisdom of the Great Spirit.
Your spirit was strong and your love for Jesus is deep,
may I trust that Christ will turn my weakness into His strength and meekness;
so that whatever comes to me this day, I may choose to do God’s will.
Amen. 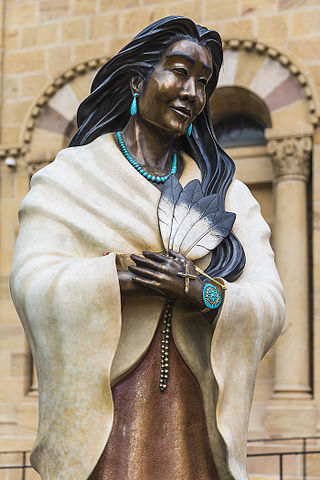