in Novena to Our Lady of Guadalupe

The Story of Our Lady of Guadalupe

Woven out of cactus fiber, exposed to the smoke and light from hundreds of thousands of candles, and the humid and salty air of Mexico City for more than 120 years without any protection, Juan's tilma should have disintegrated centuries ago. Still, almost 500 years after Mary put her image on it, we can still see it at the Basilica of Our Lady of Guadalupe, in Mexico City.
In the 1780s, experiments were made in which similar cactus-fiber cloaks were woven by some of the finest Indian weavers and then painted. They were placed in buildings around Tepeyac Hill, to mimic the conditions in which Juan's tilma was kept. After only seven years, the colors on these mantles had flaked off or faded away and the cactus fibers were disintegrating. These cloaks had a 20-year lifespan.
While the manner in which Mary left her image on Juan's tilma is miraculous in and of itself – it is not painted on or imprinted in any way humanly possible – the symbolism in the image presents a much more detailed and layered message than a mere portrait of a woman. Mary is shown standing atop a crescent moon and surrounded by the rays of the sun. Her head is bowed, her eyes are downcast, her hands are clasped in prayer, and she has a slight smile on her lips. Her rose-colored gown has floral designs, a black girdle is tied around her waist, and she wears a cloak the color of the sky and is adorned with gold stars. An angel holds the hem of her garments.
The Blessed Mother's image on Juan's tilma is like an icon, full of symbolism and meaning. Juan and his people would have understood the image according to their own beliefs and traditions. As Aztecs, they would have worshipped the gods and goddesses of the elements: Quetzalcoatl, the morning star; Huitzilopochtli, god of the sun; Coyolxauhqui and Meztli, goddesses of the moon; or Tonatiuh, god of the sun. But Mary stands atop the moon, in front of the sun, and the stars and sky make up part of her clothing. Her blue cloak is the traditional color of the gods and royalty for the Aztecs. She is showing Juan and his people that she is greater than the “gods” and these elements. And yet, her bowed head, downcast eyes, and folded hands show that she is not the greatest, that she bows before One greater than she, the “Him” of whom she spoke: her Son, present in her womb!

Here are some other symbolic meanings of the image on Juan's tilma:

- The rays that surround our Blessed Mother symbolize supreme power.

- The crescent moon symbolizes Mary's perpetual virginity and hearkens back to Revelation 12:1, “a woman clothed with the sun, with the moon under her feet…”

- The gold border around Mary's mantle symbolizes her royal dignity.

- The stars are reminiscent of heaven, identifying Mary as Queen of Heaven.

- The eight-pointed stars symbolize baptism and the gifts of new birth that God gave Juan and all Americans through Mary.

- The stars on Mary's mantle are in the same pattern as the stars that were present over Tenochtitlan just before sunrise on December 12, 1531. They are seen in reverse as if seen from outside the dome of the heavens (God's perspective!).

- The rose-colored gown, similar in design to what Our Lady would have worn during her life, is a symbol of martyrdom for the Faith and of divine love. It also represents the color of the dawn of a new era.

- The cuffs of the gown are lined with what looks like white ermine, a symbol of purity and honor without stain (Also, it was cold in December!)

- The floral designs on the Blessed Mother's gown have an have an astounding array of meanings, part of which include new life for the Aztecs, transforming their culture from one of human sacrifice to one of love, founded in her Son.

- The black girdle around her waist would have been a clear symbol to the Aztecs that Mary was pregnant.

- Directly below Mary's belt is a small, four-petalled flower that is not found anywhere else on Mary's tunic. This is the nahui ollin, the jasmine flower, called the Flower of the Sun by the Aztecs, a symbol of plentitude, representing the four compass directions. For the Aztecs, this flower symbolized the center of the universe, and placed above Mary's womb, they would have read it to say that a new sun was born of this Virgin, and would bring them new life in baptism.

- The gold brooch with a cross at her neck identifies Mary as sacred, like a holy temple, and protected against all profanation. The Aztecs would have also remembered seeing the symbol of the cross on the flags of Cortez's army.

- The angel's red, white, and blue feathered wings symbolize loyalty, faith, and fidelity. His red tunic symbolizes love for the Virgin, and his position indicates that Mary has been raised above the angels, as Mother of God.

Some other amazing facts about the tilma that have been discovered over the centuries:

- In 1785, a worker accidentally spilled nitric acid on the top right corner of the tilma. While it should have disintegrated the cactus fibers, it only left a small stain.

- On November 14, 1921, a bomb detonated beneath the tilma, destroying the nearby altar, bending an iron crucifix, and breaking the marble floor and windows 150 meters from the explosion. The tilma and the glass that covered it – which was normal, non-bomb resistant glass – remained completely unharmed. The crucifix can still be seen in the museum of the shrine in Mexico City.

- In 1929, it was discovered that Mary's eyes reflect Juan Diego as Our Lady saw him. Further examinations by Dr. José Aste Tonsmann revealed not only Juan's image but those of the Bishop and his retinue kneeling before the image. The reflections even show a distortion, matching the curvature of Mary's eye as well as the presence of the triple reflection characteristic of all live human eyes.

- Infrared rays reveal that the tilma has no traces of paint and that the fabric has not been treated with any kind of technique.

- The image changes color slightly according to the angle of the viewer, a phenomenon known as iridescence, a technique that cannot be reproduced with human hands.

God of power and mercy,
You blessed the Americas at Tepeyac
With the presence of the Virgin Mary of Guadalupe.
May her prayers help all men and women
To accept each other as brothers and sisters.
Through your justice present in our hearts
May your peace reign in the world.

O God, you have been pleased to bestow upon us unceasing favors by having placed us under the special protection of the Most Blessed Virgin Mary. Grant us, your humble servants, who rejoice in honoring her today upon earth, the happiness of seeing her face to face in heaven...(mention your requests here). 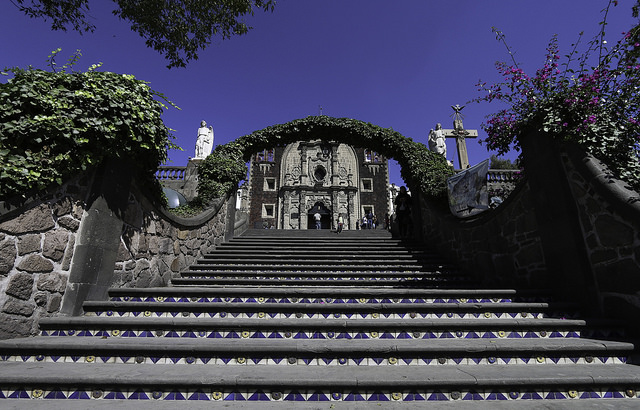 "A great sign appeared in the sky, a woman clothed with the sun, with the moon under her feet, and on her head a crown of twelve stars. She was with child and wailed aloud in pain as she labored to give birth. Then another sign appeared in the sky; it was a huge red dragon, with seven heads and ten horns, and on its heads were seven diadems. Its tail swept away a third of the stars in the sky and hurled them down to the earth. Then the dragon stood before the woman about to give birth, to devour her child when she gave birth. She gave birth to a son, a male child, destined to rule all the nations with an iron rod. Her child was caught up to God and his throne." Revelation 12, 1-5

Our Lady of Guadalupe, pray for us!

1) The tilma exposed at the High Altar of Our Lady of Guadalupe, Guadalupe Sanctuary, Mexico City. Photograph by Fr. Lawrence Lew, O.P

2) The Chapel on Tepeyac Hill: the Capilla del Cerrito (Chapel of the Little Hill) was built on the spot where St Juan Diego first saw the Blessed Virgin Mary. Photograph by Fr. Lawrence Lew, O.P.