Day One - The Forgiven Sinner - Hozana

Day One - The Forgiven Sinner 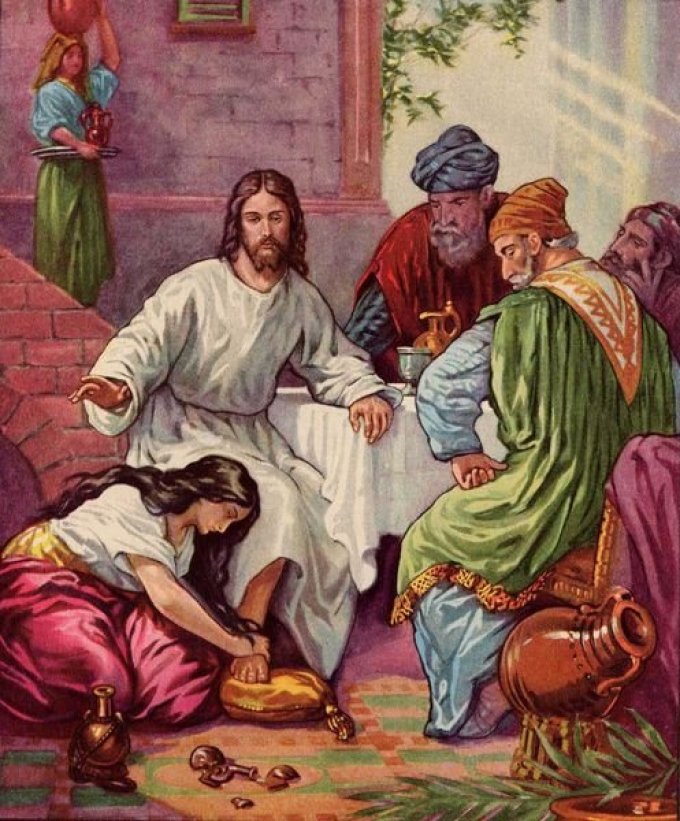 A Pharisee invited [Jesus] to dine with him, and he entered the Pharisee’s house and reclined at the table. Now there was a sinful woman in the city who learned that he was at table in the house of the Pharisee. Bringing an alabaster flask of ointment, she stood behind him at his feet weeping and began to bathe her feet with her tears. Then she wiped them with her hair, kissed them, and anointed them with the ointment. When the Pharisee who had invited him saw this he said to himself, “If this man were a prophet, he would know who and what sort of woman this is who is touching him, that she is a sinner.” Jesus said to him in reply, “Simon, I have something to say to you.” “Tell me, teacher,” he said. “Two people were in debt to a certain creditor; one owed five hundred days’ wages and the other owed fifty. Since they were unable to repay the debt, he forgave it for both. Which of them will love him more?” Simon said in reply, “The one, I suppose, whose larger debt was forgiven.” He said to him, “You have judged rightly.” Then he turned to the woman and said to Simon, “Do you see this woman? When I entered your house, you did not give me water for my feet, but she has bathed them with her tears and wiped them with her hair. You did not give me a kiss, but she has not ceased kissing my feet since the time I entered. You did not anoint my head with oil, but she anointed my feet with ointment. So I tell you, her many sins have been forgiven; hence, she has shown great love. But the one to whom little is forgiven, loves little.” He said to her, “Your sins are forgiven.” The others at table said to themselves, “Who is this who even forgives sins?” But he said to the woman, “Your faith has saved you; go in peace.”

Mary Magdalen is always described as a gorgeous, delicate, intelligent woman. She lives the lifestyle of the rich and famous and is invited to every feast or party. She is, by all means, the local celebrity, and enjoys being the focus of all attention. Admirers, lovers, money, what’s not to like, after all?

Eventually, the socialite grows weary of her frenzied life and feels crushing solitude and emptiness within her heart.

One day, as she is traveling from Bethany to Magdala, she hears about another traveler, a man who leaves in his wakes miracles and prodigies. From Jerusalem to Capernaum, from Samaria to Galilee, accounts are surfacing about miraculous healing, demons casting, forgiveness of sins… People start following him, like this famous crooked publican, Levy. Unbelievable!

Many Pharisees are outraged by the attitude and behavior of this man, who goes by the name of Jesus: who does he think he is, the Son of God? Who is he, that Jew, to eat at the sinners' table? Who is he, to forgive sins? On whose authority is he acting?

Jesus replied to the Pharisees, “Those who are healthy do not need a physician, but the sick do. I have not come to call the righteous to repentance but sinners.” (Luke 5, 31-32)

Upon hearing that, Mary Magdalene realizes that she is sick and sinful. She becomes convinced that this odd man can heal her and make her whole again.

Mary Magdalene hears that Jesus is invited at Simon the Pharisee’s house. She decides to meet him there, without thinking twice. She irrupts in the middle of the feast, throws herself at Jesus’ feet, crying all the tears of her body in repentance.

Humbly, Mary Magdalene wipes Christ’s feet with her hair. She embraces them and pours onto them a costly perfume.

Knowing all too well what thoughts were running through Simon’s mind, Christ tells him: “Her many sins have been forgiven; hence, she has shown great love.” (Luke 7,47)

Caoimhe Doyle
1 year ago
Thank. You for this. Lovely. Caoimhe
Pray Answer

Danielle
Bozeman, 1 year ago
Stay tuned for more! Thanks for your kind comment, Caoimhe. Blessings.
Pray

Summary - In the grace of Jesus with Mary Magdalene ! From the 14th to the 22nd of July, receive 9 meditations to discover Mary Magdalene, her life, her conversion and her Love story with Jesus! Discover the community