Easter Sunday: “Jesus himself drew near and walked along with them”

Gospel of Jesus Christ according to Saint Luke 24:13-35

On that same day two of Jesus' followers were going to a village named Emmaus, about seven miles from Jerusalem, and they were talking to each other about all the things that had happened. As they talked and discussed, Jesus himself drew near and walked along with them; they saw him, but somehow did not recognize him. Jesus said to them, “What are you talking about to each other, as you walk along?”

They stood still, with sad faces. One of them, named Cleopas, asked him, “Are you the only visitor in Jerusalem who doesn't know the things that have been happening there these last few days?”

“What things?” he asked.

“The things that happened to Jesus of Nazareth,” they answered. “This man was a prophet and was considered by God and by all the people to be powerful in everything he said and did. Our chief priests and rulers handed him over to be sentenced to death, and he was crucified. And we had hoped that he would be the one who was going to set Israel free! Besides all that, this is now the third day since it happened. Some of the women of our group surprised us; they went at dawn to the tomb, but could not find his body. They came back saying they had seen a vision of angels who told them that he is alive. Some of our group went to the tomb and found it exactly as the women had said, but they did not see him.”

Then Jesus said to them, “How foolish you are, how slow you are to believe everything the prophets said! Was it not necessary for the Messiah to suffer these things and then to enter his glory?” And Jesus explained to them what was said about himself in all the Scriptures, beginning with the books of Moses and the writings of all the prophets.

As they came near the village to which they were going, Jesus acted as if he were going farther; but they held him back, saying, “Stay with us; the day is almost over and it is getting dark.” So he went in to stay with them. He sat down to eat with them, took the bread, and said the blessing; then he broke the bread and gave it to them. Then their eyes were opened and they recognized him, but he disappeared from their sight. They said to each other, “Wasn't it like a fire burning in us when he talked to us on the road and explained the Scriptures to us?”

They got up at once and went back to Jerusalem, where they found the eleven disciples gathered together with the other and saying, “The Lord is risen indeed! He has appeared to Simon!”

The two then explained to them what had happened on the road, and how they had recognized the Lord when he broke the bread.

On this beautiful day of the Resurrection, let's let the Crucified and Risen One come closer to us. It's not so easy to let someone move freely towards us. We are constantly reminded to be cautious, especially towards others. What could this man possibly want who walks along the same road as these two companions who are disoriented by these most recent events that they experienced in Jerusalem? They really are disoriented. Everything happened so fast: Jesus' arrest, a trial on trumped-up charges, the torture, the swift condemnation, and that scene at Calvary that remains engraved in their memories. They don't understand and are still in shock from those dramatic hours. So, mistrust makes its way into them. But this interrogation by an unknown stranger along the way, even if it might be disturbing, offers the beginnings of an adventure. No, history did not stop on the hill called Golgotha and in the chill of the new tomb that was closed in a hurry. Would life be back to normal again?

The One who is The Life itself is still inviting himself into our lives. And a man, the unknown person on the road to Emmaus approaches us still today. For God always has chosen to approach His children, and at any time: it's not we who go to God, it's God who reaches out to every one of us, whatever our history and our hope, even if we're like a flag flying at half-staff. Let's let the risen Jesus come near us. The unknown aspects of the path are revealed. We've discovered throughout this Lent an experience of closeness to Christ. Will it be erased as quickly as we close a book to put it on a library shelf? Because, this presence of the Beloved, made manifest throughout Lent, has left us with a taste for Him, a holy daring, a sense of peace... We came before God at the beginning of Lent like a stone before a sculptor, letting Him shape our lives by His Love and Mercy. God is not some magician who transforms reality to make our life easy. He is the Presence who, in his Son Jesus, has gone through derision, suffering, and death to join us in our wounded humanity and to invite us to Life, the Life of resurrection. So, we can't remain shut up as if in a tomb. We must dare to take new steps and to speak new words that will be more than simply a vague childhood memory: we must dare to take actions and speak words that will have passed through the fear, the solitude, and the decay of sin to finally discover that God isn't there where we had left Him, locked up in a definition, in a tomb of our own making: He is Presence forever.

Jesus makes a date with us and waits for us elsewhere. The tomb is open. Life has  escaped. The Risen One, keeping the traces of his Passion, waits for us and welcomes us. The stone from the tomb has been rolled away. Death left its shackles and Life appears again. Like a spring flower that awakens, let us dare to open our hearts to let the life of this man who walks by our side flow through our existence. Just as these two companions were surprised by the friendly presence of this stranger who became so close, we shout with all our strength: “Stay with us, because the evening is approaching and the day is already falling.” With them we discover that God in his Son Jesus makes himself present in our history with his closeness, friendship, and tenderness. Are we going to invite Him to come into our home? He is the Host of our lives forever. It's up to us to welcome Him. It's up to us to receive Him.

To conclude this retreat, I would like to let our Brother Lawrence whisper once more in our ears: “Remember, I beg you, what I recommended to you, that is, to think of God often, night and day, in all your activities, and even when you relax. He is always near you and with you; do not leave him alone.” (Letter 10)

In following the recommendations of our Brother Lawrence we will be invited – like our two companions walking along the road to Emmaus – to experience this blessing: God, in his Son Jesus, walks alongside us, and at every moment.

Christ is risen! He is risen indeed, alleluia! 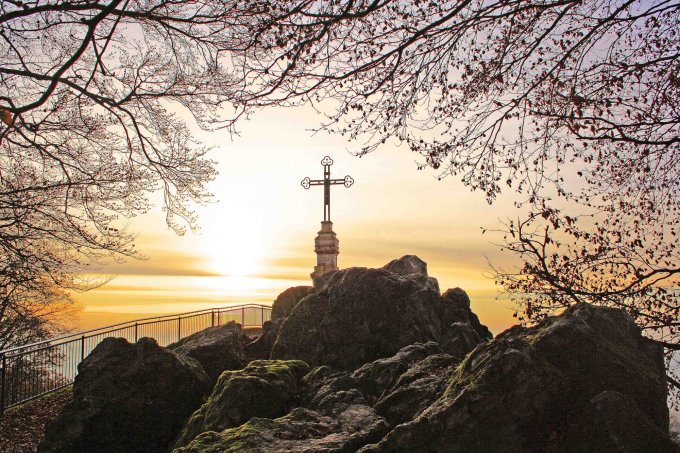 Lent 2020 with Brother Lawrence of the Resurrection