Danielle in 7 days with the Saints - but not your usual!

Welcome to our third day together! Today, we'll talk about dogs. Yes, the letters are in the right order.

I wonder what went through the mind of Stephen (Etienne) of Bourbon, a 13-century Dominican inquisitor, when he reported to his superiors from the northern Lyon area. Something like "Gosh, I hate my job" or "praise God for the opportunity for such an interesting outlook on socio-anthropology", I guess we will never know.

In his “De Supersticione,” a subdivision of his book “De Septem Donis Spiritus Sancti” (The Seven Gifts of the Holy Spirit), he wrote the following:  "When preaching there against sorcery and hearing confessions, I heard many women confess that they had carried their children to St. Guinefort. I thought he was some saint. I made inquiries and at last heard that he was a certain greyhound killed in the following way. In the diocese of Lyons, close to the vill of the nuns called Villeneuve, on the land belonging to the lord of Villars-en-Dombe, there was a certain castle whose lord had a baby son from his wife. But when the lord and lady and the nurse too had left the house, leaving the child alone in his cradle, a very large snake entered the house and made for the child's cradle. The greyhound, who had remained there, saw this, dashed swiftly under the cradle in pursuit, knocking it over, and attacked the snake with its fangs and answering bite with bite. In the end, the dog killed it and threw it far away from the child's cradle which he left all bloodied as was his mouth and head, with the snake's blood, and stood there by the cradle all beaten about by the snake. When the nurse came back and saw this, she thought the child had been killed and eaten by the dog and so gave out an almighty scream. The child's mother heard this, rushed in, saw and thought the same and she too screamed. Then the knight similarly once he got there believed the same, and drawing his sword killed the dog. Only then did they approach the child and find him unharmed, sleeping sweetly in fact. On further investigation, they discovered the snake torn up by the dog's bites and dead. Now that they had learned the truth of the matter, they were embarrassed (dolentes) that they had so unjustly killed a dog so useful to them and threw his body into a well in front of the castle gate, and placing over it a very large heap of stones they planted trees nearby as a memorial of the deed.
But the castle was in due course destroyed by divine will, and the land reduced to a desert abandoned by its inhabitants. The local peasants hearing of the dog's noble deed and innocent death, began to visit the place and honor the dog as a martyr in quest of help for their sicknesses and other needs. [...]
We went to the place and assembled the people and preached against the practice. We then had the dead dog dug up and the grove of trees cut down and burned along with the dog's bones. Then we had an edict enacted by the lords of the land threatening the spoliation and fining of any people who gathered there for such a purpose in future." 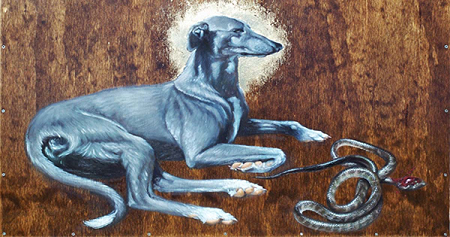 Quite a story, isn't it? The idea of a saint dog does appeal to pet owners who think that a loyal dog is certainly worthy of such an honor, and brings amusement to those who find the same idea absurd. However, do not be mistaken: the puppy's cult was a real thing, and St. Guinefort the holy greyhound was venerated in medieval France, up until the 1940's, despite the Church strong reprobation.

Stephen's dismay didn't stem only from witnessing a rather unorthodox cult, but mostly from finding out that something much more sinister was unraveling: "Women especially, with sick or poorly children, carried them to the place, and went off a league to another nearby castle where an old woman could teach them a ritual for making offerings and invocations to the demons and lead them to the right spot. When they got there, they offered salt and certain other things, hung the child's little clothes (diapers?) on the bramble bushes around, fixing them on the thorns. They then put the naked baby through the opening between the trunks of two trees, the mother standing on one side and throwing her child nine times to the old woman on the other side, while invoking the demons to adjure the fauns in the wood of "Rimite" to take the sick and failing child which they said belonged to them (the fauns) and return to them their own child big, plump, live and healthy. Once this was done, the killer mothers took the baby and placed it naked at the foot of the tree on the straws of a cradle, lit at both ends two candles a thumbsbreadth thick with fire they had brought with them and fastened them on the trunk above. Then, while the candles were consumed, they went far enough away that they could neither hear nor see the child. In this way, the burning candles burned up and killed a number of babies, as we have heard from others in the same place.
One woman told me that after she had invoked the fauns and left, she saw a wolf leaving the wood and going to the child and the wolf (or the devil in wolf's form, so she said) would have devoured it had she not been moved by her maternal feelings and prevented it. On the other hand, if when they returned they found the child alive, they picked it up and carried it to a swiftly flowing river nearby, called the Chalaronne [tributary of the Saône], and immersed it nine times, to the point where if it escaped dying on the spot or soon after, it must have had very tough innards." 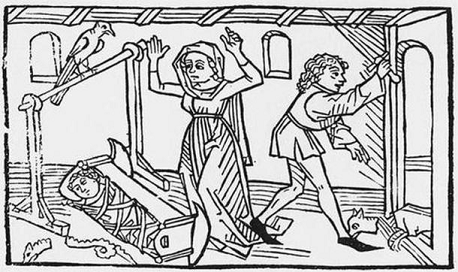 Guinefort's story opens the door to captivating discussions: dogs and sainthood, their heroic selflessness, terrible parenting, the consequences of impulsive behavior, the Inquisition, the societal outlook on disabled children, the changelings theory, the Freudian meaning of the wolf, the symbolics of immersion in the river that points to the medieval trials of water and fire, or to baptism, and of course the old debate whether there are pets and other animals in Heaven (spoiler alert: we don't know). However, one certitude remains: from St. Francis of Assisi to St. Felix of Nola (the saint patron of spiders), animals often played an important role in the saints' lives.

"Evening came, and morning followed—the fourth day. Then God said: Let the water teem with an abundance of living creatures, and on the earth let birds fly beneath the dome of the sky. God created the great sea monsters and all kinds of crawling living creatures with which the water teems, and all kinds of winged birds. God saw that it was good, and God blessed them, saying: Be fertile, multiply, and fill the water of the seas; and let the birds multiply on the earth. Evening came, and morning followed—the fifth day.
Then God said: Let the earth bring forth every kind of living creature: tame animals, crawling things, and every kind of wild animal. And so it happened: God made every kind of wild animal, every kind of tame animal, and every kind of thing that crawls on the ground. God saw that it was good." Genesis 1,19-25

And as the Catechism of the Catholic Church reminds us, “Animals are God’s creatures. He surrounds them with his providential care. By their mere existence, they bless him and give him glory. Thus people owe them kindness. We should recall the gentleness with which saints like St. Francis of Assisi or St. Philip Neri treated animals.” 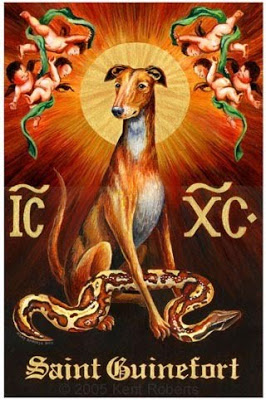 Father creator, Almighty God, help us follow the example of St. Francis of Assisi, who showed his love for all his fellow creatures and taught us to call them our brothers and sisters. Amen.

Hear our humble prayer, O God,
for our friends the animals, your creatures.
We pray especially for all that are suffering in any way:
for the overworked and underfed,
the hunted, lost, or hungry;
for all in captivity or ill-treated,
and for those that must be put to death.
For those who deal with them,
we ask a gentle heart of compassion,
gentle hands, and kindly words.
Make us all true friends to animals
and worthy followers of our merciful Savior, Jesus Christ.
Taken from Catholic Household Blessings and Prayers, 1998. 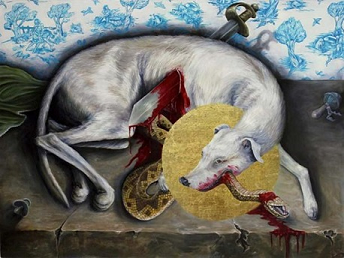 7 days with the Saints - but not your usual!

Saint Isidore and other saints for modern-day calamities

There was fourteen of them...