Karol Jozef Wojtyla, known as John Paul II since his October 1978 election to the papacy, was born in the Polish town of Wadowice, a small city fifty kilometers from Krakow, on 18 May 1920. He was the youngest of three children.
He was baptized on June 20, 1920, in the parish church of Wadowice, made his First Holy Communion at age 9 and was confirmed at 18. Upon graduation from Marcin Wadowita high school in Wadowice, he enrolled in Krakow's Jagiellonian University in 1938 and in a school for drama.
The Nazi occupation forces closed the university in 1939, and young Karol had to work in a quarry (1940-1944) and then in the Solvay chemical factory to earn his living and to avoid being deported to Germany.
In 1942, aware of his call to the priesthood, he began courses in the clandestine seminary of Krakow, run by Cardinal Adam Stefan Sapieha, archbishop of Krakow.
After the Second World War, he continued his studies in the major seminary of Krakow, once it had re-opened, and in the faculty of theology of the Jagiellonian University. He was ordained to the priesthood by Archbishop Sapieha in Krakow on November 1, 1946.
On January 13, 1964, he was appointed archbishop of Krakow by Pope Paul VI, who made him a cardinal on June 26, 1967.
The Cardinals elected him Pope at the Conclave of 16 October 1978, and he took the name of John Paul II. On 22 October, the Lord's Day, he solemnly inaugurated his Petrine ministry as the 263rd successor to the Apostle. His pontificate, one of the longest in the history of the Church, lasted nearly 27 years.
Driven by his pastoral solicitude for all Churches and by a sense of openness and charity to the entire human race, John Paul II exercised the Petrine ministry with a tireless missionary spirit, dedicating it all his energy.
His love for young people brought him to establish the World Youth Days. The 19 WYDs celebrated during his pontificate brought together millions of young people from all over the world. At the same time, his care for the family was expressed in the World Meetings of Families, which he initiated in 1994.
John Paul II successfully encouraged dialogue with the Jews and with the representatives of other religions, whom he several times invited to prayer meetings for peace, especially in Assisi.
Under his guidance, the Church prepared herself for the third millennium and celebrated the Great Jubilee of the year 2000 in accordance with the instructions given in the Apostolic Letter Tertio Millennio Adveniente.
His most important documents include 14 Encyclicals, 15 Apostolic Exhortations, 11 Apostolic Constitutions, 45 Apostolic Letters.
He promulgated the Catechism of the Catholic Church in the light of Tradition as authoritatively interpreted by the Second Vatican Council. He also reformed the Eastern and Western Codes of Canon Law, created new Institutions and reorganized the Roman Curia.
He also published five books of his own: "Crossing the Threshold of Hope" (October 1994), "Gift and Mystery, on the fiftieth anniversary of my ordination as priest" (November 1996), "Roman Triptych" poetic meditations (March 2003), "Arise, Let us Be Going" (May 2004) and "Memory and Identity" (February 2005).
In the light of Christ risen from the dead, on April 2nd, 2005, at 9.37 p.m., while Saturday was drawing to a close and the Lord's Day was already beginning, the Octave of Easter and Divine Mercy Sunday, the Church's beloved Pastor, John Paul II, departed this world for the Father.
From that evening until April 8, date of the funeral of the late Pontiff, more than three million pilgrims came to Rome to pay homage to the mortal remains of the Pope. Some of them queued up to twenty-four hours to enter St. Peter's Basilica.
On April 28, the Holy Father Benedict XVI announced that the normal five-year waiting period before beginning the cause of beatification and canonization would be waived for John Paul II. The cause was officially opened by Cardinal Camillo Ruini, vicar general for the diocese of Rome, on June 28, 2005.
He was beatified by Pope Benedict XVI on May 1st, 2011.
From "Biography of Pope John Paul II," 4/26/2014, Holy See Press Office, Vatican Information Service.

Saint John Paul II is the saint patron of young Catholics, World Youth Day and families, among others.

On Christian duty: "Yours is the gigantic task of overcoming all evil with good, always trying amidst the problems of life to place your trust in God, knowing that his grace supplies strength to human weakness. You must oppose every form of hatred with the invincible power of Christ’s love."

On Christian identity: "We are not the sum of our weaknesses and failures; we are the sum of the Father’s love for us and our real capacity to become the image of his Son."

Love and service give meaning to our lives and make them beautiful, because we know for what reason and for whom we are committed. It is in the name of Christ who loved us and served us first. Is there anything greater than knowing that we are loved? How can we fail to respond joyfully as we wait for the Lord? Love is the witness par excellence which leads to hope. Service of others transfigures life; it shows that hope and living in fraternal union are stronger than any temptation to despair. Love can triumph in every circumstance.

Unsettled by Jesus’ humble gesture, Peter says to him: "Lord do you wash my feet? ... You shall never wash my feet" (Jn 13:6,8). As with him, it takes us time to understand the mystery of salvation and we sometimes refuse to follow the "little way" of love. Only those who allow themselves to be loved are able to love in turn. Peter allowed the Lord to wash his feet. He let himself be loved, then he understood. Dear young people, experience the love of Christ: you will become aware of what he has done for you and then you will understand. Only those who live in intimacy with their Master can imitate him. Those who are nourished by the Body of Christ find the strength to act in brotherhood. Between Christ and his disciple there is thus created a bond of closeness and unity which profoundly transforms the person’s being, making him or her a servant. Dear young people, you will come to ask yourselves how it is that you are to serve Christ. In the washing of the feet you will find the royal road to union with Christ, in imitating him and in discovering him in your brothers and sisters.
Meditation of John Paul II, on the occasion of the 12th World Youth Day in France, 8/21/1997.

Prayer for the Youth with Saint John Paul II

O St. John Paul, from the window of heaven, grant us your blessing! Bless the church that you loved and served and guided, courageously leading it along the paths of the world in order to bring Jesus to everyone and everyone to Jesus. Bless the young, who were your great passion. Help them dream again, help them look up high again to find the light that illuminates the paths of life here on earth.
May you bless families, bless each family! You warned of Satan's assault against this precious and indispensable divine spark that God lit on earth. St. John Paul, with your prayer, may you protect the family and every life that blossoms from the family.
Pray for the whole world, which is still marked by tensions, wars, and injustice. You tackled war by invoking dialogue and planting the seeds of love: pray for us so that we may be tireless sowers of peace.
O St. John Paul, from heaven's window, where we see you next to Mary, send God's blessing down upon us all. Amen. 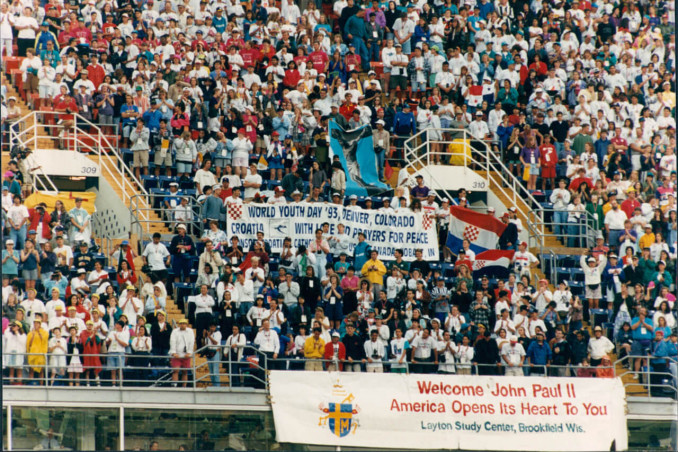