On the Seventh Day - Hozana

Danielle in Novena to Our Lady of Guadalupe

The story of our Lady of Guadalupe

When Juan Diego reached the bishop's palace, there came to meet him the majordomo and other servants of the prelate. He begged them to tell the bishop that he wished to see him, but none were willing, pretending not to hear him, probably because it was too early, or because they already knew him as being of the molesting type, because he was pestering them; and, moreover, they had been advised by their co-workers that they had lost sight of him, when they had followed him.
He waited a long time. When they saw that he had been there a long time, standing, crestfallen, doing nothing, waiting to be called, and appearing like he had something which he carried in his tilma, they came near him, to see what he had and to satisfy themselves. Juan Diego, seeing that he could not hide what he had, and on account of that he would be molested, pushed or mauled, uncovered his tilma a little, and there were the flowers; and upon seeing that they were all different Rosas de Castilla, and out of season, they were thoroughly amazed, also because they were so fresh and in full bloom, so fragrant and so beautiful. They tried to seize and pull some out, but they were not successful the three times they dared to take them. They were not lucky because when they tried to get them, they were unable to see real flowers. Instead, they appeared painted or stamped or sewn on the cloth. Then they went to tell the bishop what they had seen and that the Indian who had come so many times wished to see him, and that he had reason enough so long anxiously eager to see him.
Upon hearing, the bishop realized that what he carried was the proof, to confirm and comply with what the Indian requested. Immediately he ordered his admission. As he entered, Juan Diego knelt before him, as he was accustomed to do, and again related what he had seen and admired, also the message. He said: 'Sir, I did what you ordered, to go forth and tell my Ama, the Lady from heaven, Holy Mary, precious Mother of God, that you asked for a sign so that you might believe me that you should build a temple where she asked; also, I told her that I had given you my word that I would bring some sign and proof, which you requested, of her wish. She condescended to your request and graciously granted your request, some sign and proof to complement her wish. Early today she again sent me to see you; I asked for the sign so you might believe me, as she had said that she would give it, and she complied. She sent me to the top of the hill, where I was accustomed to see her, and to cut a variety of Rosas de Castilla. After I had cut them, I brought them, she took them with her hand and placed them in my cloth, so that I bring them to you and deliver them to you in person. Even though I knew that the hilltop was no place where flowers would grow, because there are many crags, thistles, thorns, nopales, and mezquites, I still had my doubts. As I approached the top of the hill, I saw that I was in paradise, where there was a great variety of exquisite Rosas de Castilla, in brilliant dew, which I immediately cut. She had told me that I should bring them to you, and so I do it, so that you may see in them the sign which you asked of me and comply with her wish; also, to make clear the veracity of my word and my message. Behold. Receive them.”
He unfolded his white cloth, where he had the flowers; and when they scattered on the floor, all the different varieties of Rosas de Castilla, suddenly there appeared the drawing of the precious Image of the ever-virgin Holy Mary, Mother of God, in the manner as she is today kept in the temple at Tepeyac, which is named Guadalupe.
When the bishop saw the image, he and all who were present fell to their knees. She was greatly admired. They arose to see her; they shuddered and, with sorrow, they demonstrated that they contemplated her with their hearts and minds. The bishop, with sorrowful tears, prayed and begged forgiveness for not having attended her wish and request. When he rose to his feet, he untied from Juan Diego's neck the cloth on which appeared the Image of the Lady from heaven. Then he took it to be placed in his chapel. Juan Diego remained one more day in the bishop's house, at his request.
The following day, he told him: 'Well! show us where the Lady from heaven wished her temple be built.' Immediately, he invited all those present to go.

Mary, Mother of the Church,
Help the Church in these lands
To follow your example of sublime love and profound humility.
With you, may we be obedient to the commandment of love,
And give ourselves wholeheartedly
To seeking the glory of Christ
and serving the needs of our brothers and sisters.

O Lady of Guadalupe, we beg you that parents live a holy life and educate their children in accordance with the true Catholic faith; that children obey and follow the directions of their parents; and that all members of the family pray and worship together. This we ask of you, O Mother...(mention your requests here). 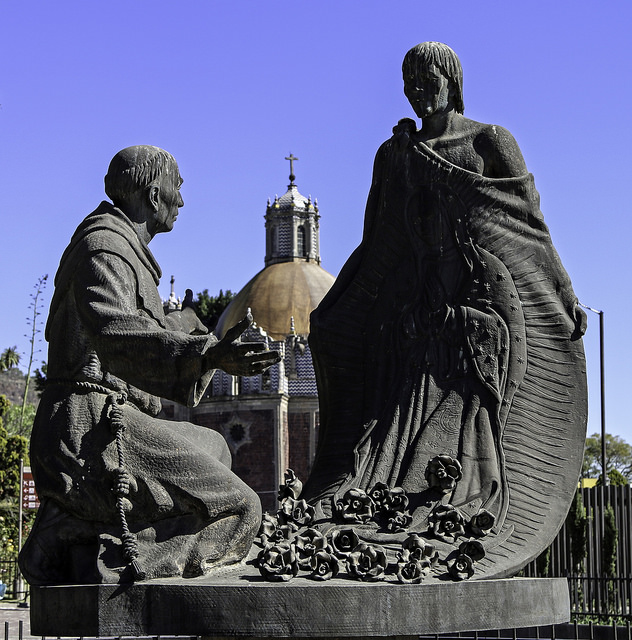 "The feast of Our Lady of Guadalupe, the Mother of the ONE Church in America, is a story of how God acted in a people's history to bring light in a time of great darkness. The earliest account of the Guadalupe story states that “when it was night,” a great sign appeared in this part of the world: “a woman clothed with the sun, with the moon at her feet” (Revelation 12:1).
This gentle, pregnant woman came with a message of hope, a vision of unity from the God of “What is Near and Together.” Speaking to the powerful through a humble and wise Indian man, she offered all her children the opportunity to build together a Church where the homeless are welcomed, the sorrowful comforted, the sick healed, and the voiceless empowered. The imprint of her lovely brown face on the strands of Juan Diego's garment still calls to the Church in America to weave together the many races and cultural groups of the continent into a “new creation.”
The message of the Virgin of Guadalupe is the same one she sang over two thousand years ago in her beautiful Magnificat. “God,” she says, “has looked upon my lowliness and from this day all generations shall call me blessed!” (Luke 1:48). Mary, the poor, young woman from Nazareth, knew what it meant to count for nothing in this world. She, like Juan Diego, lived her earthly life as a member of a conquered people living under occupation. Yet even in the face of a seemingly hopeless reality, Mary could envision a new reality — God's Reign dawning upon the world from inside her womb.
This reign, Mary proclaimed, will be a complete revolution — not of swords and violence — a total change in the social order as we know it now. The poor will be lifted up and partake in a sumptuous banquet, while those who are rich in their greed and pride will fall on their faces and go away empty. This is not the cruel payback of an angry god; rather, it is a compassionate way of bringing empowerment and healing to the disinherited, and an opportunity for conversion for those who will learn in no other way." - Dr. Arturo Chavez, in "Awakening the Prophet Within: Reflections for Advent 2006."

2) A sculpture of Juan Diego and the Bishop - Sanctuary of Our Lady of Guadalupe in Mexico City. Photograph by Fr. Lawrence Lew, O.P.

On the Sixth Day

On the Fifth Day

On the Fourth Day