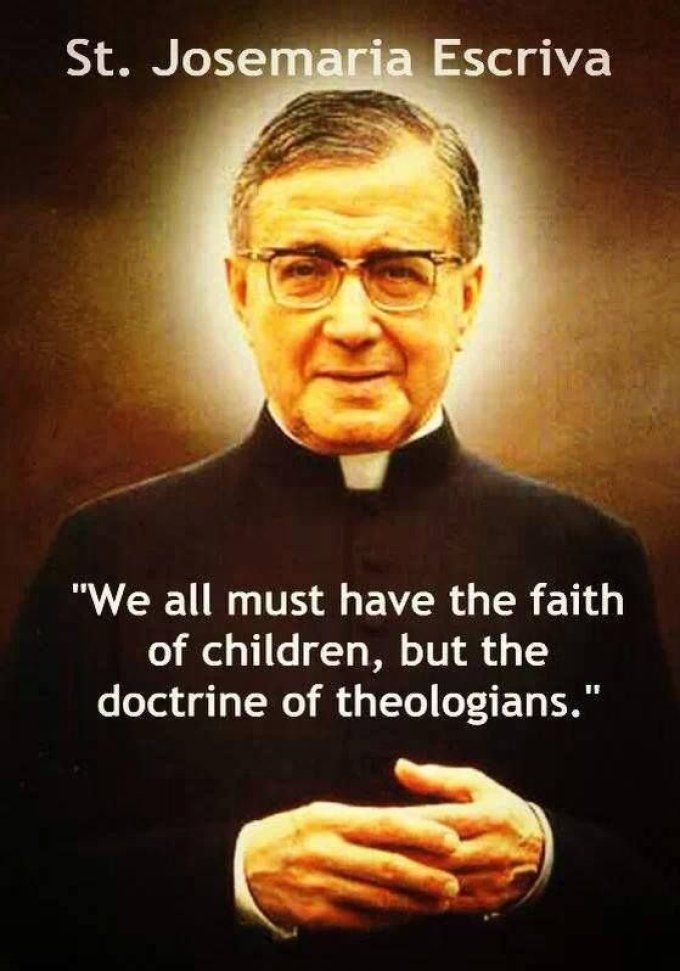 Numerous favours and recoveries are obtained by Josemaría Escrivá's intercession. Thousands of people of every condition, including more than a third of the world episcopacy, seek from the Holy See the opening of his cause to batification and canonisation.

The testimonies collected bring up his cordiality, his love of God, his piety, his care for the souls and the way he lived not only the supernatural Christian values but also the human values: sincerity, loyalty, diligence at work, temperance, etc.

Paul VI has once said that he considered the founder of the Opus Dei, that he knew well since 1946, as one of the men who had received "the more divine graces - the more charismas - and who answered with the more generosity." After exhaustive examination of the life and work of Josemaría Escrivá, and the recognition of a miracle, John-Paul II beatified him on the 17th of May 1992 on Saint Peter's Square, in front of 300,000 people. After the approval of another miracle, the canonisation was celebrated by John-Paul II, in the same place, on the 6th of October 2002. The body of the saint rests in the prelatice church of Santa Maria delle Pace, at the headquarters of the Opus Dei, 73 viale Burno Buozzi, in Rome.

In 1982 the Opus Dei is elevated by John-Paul II as a personal prelature, an ecclesiastic institution gathering persons, ruled and governed by a prelate, who may or may not be a bishop, appointed by the pope. Its believers still belong to the local churches or dioceses where they live. In the Opus Dei, they only receive a spiritual support and an encouragement to a specific apostolate, which is to spread the ideal of holiness in the ordinary life.

This apostolate is not "specialised" in specific social backgrounds or "devoted" to particular tasks, but its effect is to encourage everywhere Catholics to contribute to the resolution of our society's problems and to demonstrate their faith. Some members have created professional training schools, middle and high schools, universities, halls of residence, health centres and hospitals, etc. The prelature of the Opus Dei generally takes in charge the spiritual training offered in this institutions.

The charity comprises today 90,000 believers, men and women, including 2,015 diocesan priests, spread in 38 countries. Cooperators, who are not members of the prelature, support its apostolic initiatives by praying  and helping, financially or by other means. Moreover, almost 2,000 diocesan priests belong to a priest society, deeply linked to the Opus Dei, the Priestly Society of the Holy Cross.

The Church celebrates Saint Josemaría Escriváname day on the 26th of June, the day of his death.

The matrimonial life, "an occasion for God's presence on earth"

For Josemaría, who has supported many couples and prepared young people for marriage, it is truly a calling, an authentic way to holiness.

"When I think of Christian homes, I like to imagine them as being full of the light and joy that were in the home of the holy family. The message of Christmas is heard in all its forcefulness: "Glory to God in the highest, and on earth peace to men of good will." "And may the peace of Christ triumph in your hearts," writes the Apostle. It is a peace that comes from knowing that our Father God loves us, and that we are made one with Christ. It results from being under the protection of the Virgin, our Lady, and assisted by St Joseph. This is the great light that illuminates our lives. In the midsts of difficulties and of our own personal failings, it encourages us to keep up our effort. Every Christian home should be a place of peace and serenity. In spite of the small frustrations of daily life, an atmosphere of profound and sincere affection should reign there together with a deep-rooted calm, which is the result of authentic faith that is put into practice.

For a Christian marriage is not just a social institution , much less a mere remedy for human weakness. It is a real supernatural calling. A great sacrament, in Christ and in the Church, says St. Paul. At the same time,  it is a permanent contract between a man and a woman. Whether we like it or not, the sacrament of matrimony, instituted by Christ, cannot be dissolved. It is a permanent contract that sanctifies in cooperation with Jesus Christ. He fills the souls of husband and wife and invites them to follow him. He transforms their whole married life into an occasion for God's presence on earth."